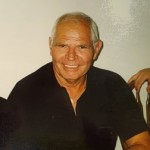 Josip “Joso” Prebanda of San Pedro, CA peacefully passed away on September 29, 2020. Born on the island of Krapanj, Croatia; Joso grew up constantly surrounded by family. In 1956, living only an arm’s length away, Joso walked across the road to ask Tonka for her hand in marriage. Later that year they welcomed their first child, Branko, and Vince followed five years later. Joso spent his days managing an aluminum manufacturing plant in Šibenik and building the family house in Brodarica. In 1970, Joso and Tonka decided to make the move to San Pedro, CA. He worked at StarKist until his retirement in 1992. Joso enjoyed gardening, tanning in his backyard and even became a master baker. Known for his traditional Croatian recipes and new techniques he learned from watching YouTube videos, Joso was keeping busy even at 92. His calm and kind demeanor along with his big heart will be missed dearly. He is survived by his two sons, Branko (Nancy) and Vince (Sandra) and many nieces and nephews. He was also the proud Dida of 6 grandchildren and 8 great grandchildren.

Preserve the memories and special thoughts shared
by friends and loved ones with a Memory Book.

Have the Talk of a Lifetime

Meaningful memorialization starts when loved ones talk about how they want to be remembered.